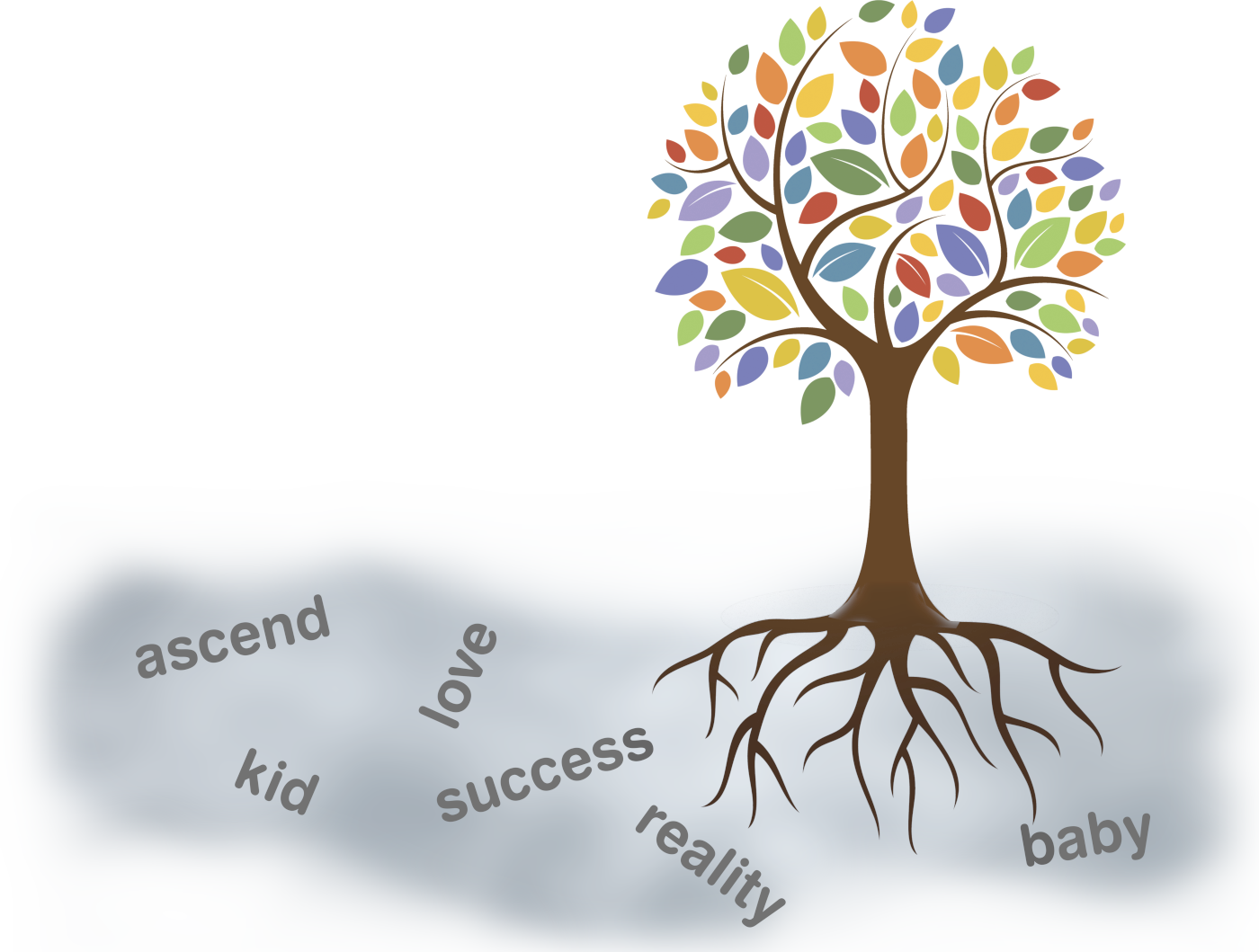 Language, Form, and
the Subconscious

Language, Form and the Subconscious - Wisdom Leading to Joy

The vast majority of what goes on in our minds is subconscious. The vast majority of our power and abilities is subconscious. Our subconscious receives information constantly, and when it is influenced without our awareness, we are also influenced and can be manipulated easily. Form is powerful. Sound is powerful. Words are powerful. Sound and language have the ability to influence physical reality. When meanings of words are distorted or subverted, the subconscious hears the original, undistorted meaning, and equates the new concepts with the original word. Culture and civilization can be destroyed by perverting language because the human mind follows language and the subconscious, and behavior follows both. Many common words have been twisted in modern times, and the resulting decline in culture and civilization is evident. It is vital for humanity to become aware of the subconscious and how it is influenced by form, sound, and especially by language, in order to avoid being manipulated into oblivion.
Paper or slides may be read below. Videos and audios will posted when ready.
Read
Slides
(5.8 MB) 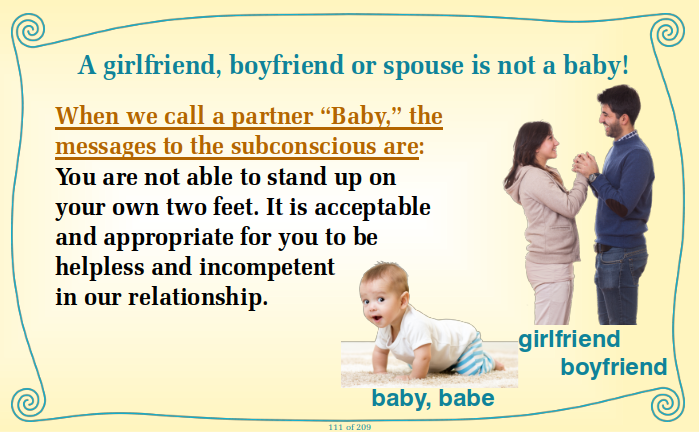 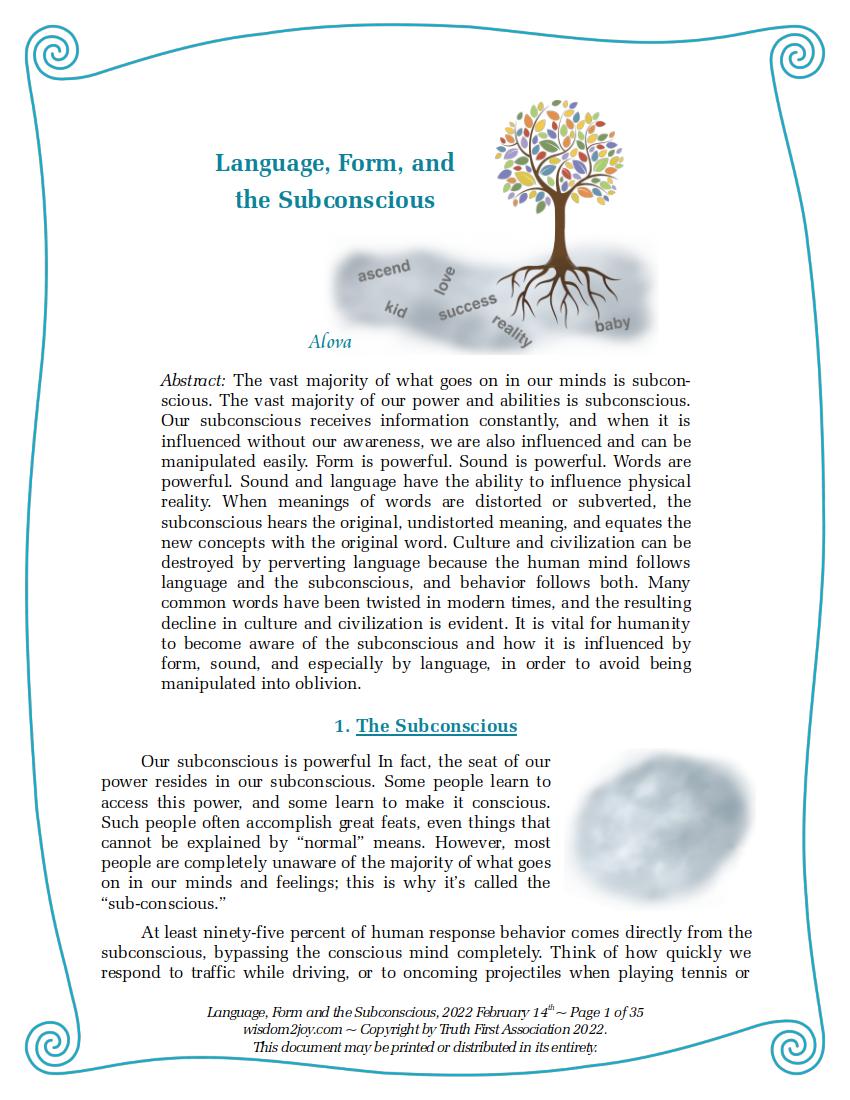 The content of these presentations has been garnered through observation, contemplation, hopefully insight, and, most importantly, experience. Ideas and assertions are simply presented for consideration. The effort is not to prove or convince, but rather to present ideas for one’s own thought, research, innate common sense, and experience.
References are included only if information is specific and may not be generally known. No offense whatsoever is taken at any disagreement or counter-assertion. Many disagreements are due to semantics. Take whatever is useful and ignore the rest. If something fits and is useful, wonderful!

Deep gratitude is expressed to developers and everyone who has assisted in making open-source software available to all. These presentations have been made possible by LibreOffice (Open Office), Audacity, SimpleScreenRecorder, RecordMyDesktop, Glimpse, Gimp, Inkscape, ImageMagick, Pitivi, ffmpeg, OpenClipart, PublicDomainVectors, and Linux. Appreciation is also expressed to FreeThesaurus.com. In addition, gratitude is expressed to all the wonderful artists who have made their work available, for pictures speak to the soul. Gratitude is also expressed to people who have contributed comments that have helped to improve these presentations, and for the expert advice of Sweetwater, which made possible the quality of these recordings and the continued sanity of the editor.

This website does not collect personal information or store "cookies," and does not maintain a mailing list. To see new postings, simply visit the website periodically, and pass on links to others if something here may be helpful to them or to the world.

The brilliant spectrum in the banner is the closest representation of the absolute joy of a realm of which I have memory since childhood. No one owns the spectrum. It is used here because of its joy.
In case it seems that it took a lot of work to create these multi-media presentations, it was negligible compared to acquiring the inner-standing required to write the content.